Please donate and help support our work on behalf of animals 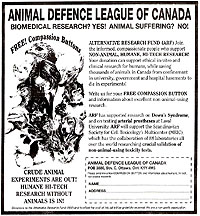 (For advertisement in full view, please click on image to the right.)

March 1982 saw the establishment of the ADLC's Alternative Research Fund (ARF) to promote and develop alternatives to the use of animals in biomedical research.

Your donations to the Alternative Research Fund help the Animal Defence League of Canada (ADLC) advance humane, hi-tech non-animal research. ARF does not fund projects which use animals or animal tissue.

ARF's first grant ($4,449.77) was in July 1985 to Dr. Brian S. Scott, Toronto, who was researching the problem of mental retardation in Down's Syndrome. Dr. Scott had developed methods to isolate and grow human nerve cells in tissue culture. In this area, where there was very little work being done by others, Dr. Scott's research was unique. His professional study of anatomy and physiology of the nervous system, particularly at the cellular level, dates from 1960 forward. Since then various scientific journals have published many of his papers.

In several of Dr. Scott's previous studies, Down's Syndrome neurons in cell culture have demonstrated a number of abnormalities in their electrophysiological function. He used microelectrodes to record electrical activity of both normal neurons and Down's neurons in cultures. (Neurons are the functional unit of the nervous system; their electrical excitations are the physical processes underlying mental processes.) A special amplifier provided by the ARF grant amplified these signals so that they could be measured accurately and compared. It was expected that this comparison would suggest what exactly is abnormal in the Down's neurons, and that this knowledge may suggest therapeutic measures to prevent or diminish the mental retardation of Down's Syndrome.

The above work was done using human nervous tissue obtained at autopsy.

We take this opportunity of expressing our thanks to Dr. Sergey Fedoroff, Head of the Department of Anatomy at University of Saskatchewan, Saskatoon, Saskatchewan for his valued assistance in having introduced to us Dr. Brian Scott and his pioneer research.

This project will validate the "Vivocycleur", an apparatus designed to replace the painful use of dogs and monkeys in testing the mechanical stability of arterial prostheses. These medical implants are used to achieve improved blood circulation in thousands of people who suffer from dangerously blocked arteries. Dr. Robert Guidoin is known internationally for his work in vascular replacement. His laboratory has been described as "probably the leading laboratory in the world for the scientific assessment of vascular prostheses." Dr. Guidon's dissatisfaction with the data yielded from tests using animals, as well as his concern for the pain endured by these animals, has led to the design of this extremely promising non-animal-using apparatus -- the "Vivocycleur" to replace the use of animals in this testing.

Esther Klein, Chairperson of the ADLC Experimentation Committee says, "Canada has no government-funded program to promote the development and validation of alternatives to the use of animals in biomedical research. Our Alternative Research Fund is a practical means of support for high-technology, non-animal-using biomedical research -- the vanguard of humane, modern medical research."

Our third ARF grant was issued June 30/94 to a Canadian participant, Dr. R. Moody of Health Canada, Environmental & Occupational Toxicology Division, Ottawa, part of the world-wide effort of MEIC (MultiCenter Evaluation of In Vitro Cytotoxicity). Our $7,000 ARF grant helped support the development of Dr. Moody's Automated In Vitro Dermal Absorption (AIVDA) method which measures the penetration and human skin absorption of various substances. Validation and acceptance of this test would replace the use of thousands of monkeys and other animals (rats and guinea pigs) now subjected to very painful skin toxicity tests all over the world.

May 1995, Dr. Moody reported that our grant was crucial in enabling him to purchase tissue-cultured human skin, High Performance Liquid Chromatography (HPLC) columns required for in vitro analyses, and a bar code reader. Dr. Moody had just returned from France, where he had been invited to serve on the Scientific Advisory Board and speak at the Fourth International Meeting on Prediction of Percutaneous Penetration. Dr. Moody's speech and poster presentation explained his lab's evolution from early tests using rhesus monkeys to the current use of his AIVDA method and test using HPLC and skin permeation tube analysis (SPTA). There was a strong focus on alternatives to animal testing at the Conference, and Dr. Moody's SPTA method was very well received. Interest in this method was expressed by representatives from Japan and other countries. Health Canada was considering patenting it.

Dec. 15/96 one of ADLC's directors attended a talk in Ottawa given by Dr. Jan van der Valk, Head of the Netherlands' Centre, Alternatives to Animal Use (NCA). The superb work being done by NCA and the excellent support being provided by the Netherlands government, industry, and animal-concerned groups, was extremely encouraging! The sharp contrast between what they have already achieved, and the abysmal attitude taken by government and industry in Canada on this issue is monumental.

"It is proposed that a small fiber optic probe . . . be purchased for Automated In Vitro Dermal Absorption tests, in order to facilitate continuous monitoring and computer data acquisition of the oxygen supplied to the human test skin and within the donor and receiver solutions." [Dr. Moody's October 2, 2002 proposal to ADLC.]

These automated in vitro tests were initiated by Dr. Moody in the 1980's at Health Canada, and use human skin specimens (instead of animals such as rhesus monkeys) to measure the rate and degree of human skin's absorption of chemicals.

This research, using human skin to obtain data for humans, is good science, spares the animals, and helps make known to the public and the biomedical scientific community the advantages and possibilities of pursuing non-animal-using research. We are very pleased to have supported this project.

"Computer-Mediated Learning Technologies to Reduce the Number of Animals in Teaching (Equine Project)": The faculty lead, Katharina Lohmann (University of Saskatchewan Western College of Veterinary Medicine, Large Animal Clinical Sciences) said the Veterinary College plans to use this teaching aid. Our grant allowed the Research and Development Team of veterinary educators to hire a student to do imaging for the animation required for this DVD. This computer DVD teaches horse-intubation and other invasive procedures without live horses having to be used for practice by students.

We are very pleased to inform all members and supporters of the Animal Defence League of Canada's Alternative Research Fund (ARF) that since Grant #5 in March 2006, your donations have made possible the latest grant, $10,000 issued to University of Ottawa Skills and Simulation Centre (uOSSC) Advanced Trauma Life Support Program (ATLS) towards purchase of a state-of-the-art interactive mannequin simulator, and/or the training and teaching of surgeons, physicians, nurses, other specialists, students and learners in the uOSSC Advanced Trauma Life Support Program (ATLS). This Program provides vitally needed human-based trauma training to care for extremely traumatic injuries such as occur in war and natural disasters, due to explosions, exposure to chemicals, burns, penetrating and gunshot wounds, and related injuries. Lifelike and highly complicated ATLS mannequin simulators which are fully interactive, with heartbeats, breath sounds, vital signs and required special capabilities, facilitate this first-rate human-based trauma training. Currently, simulators are the ATLS standard, and result in medical professionals who are simply the best at what they do.

From The Ottawa Citizen, Aug. 17, 2012: Canada's Department of National Defence (DND) claims to be "actively" looking for ways to end its use of animals in training battlefield doctors. In view of the above, ADLC urges DND to consult with uOSSC, a worldwide leader in simulation-based education and the largest simulation training centre of its kind in Canada, and adopt their Advanced Trauma Life Support Program, which provides human-based trauma training. Canada's DND could be one of the 23 NATO countries which provide state-of-the-art human-based training on modern mannequin simulators, instead of remaining part of the six NATO countries which provide second-rate suboptimal training experience by traumatizing and killing pigs and goats - which are anatomically vastly different from humans.

Note: from www.WashingtonPost.com.world/national-security/ ... 2013/02/24/ ... [paraphrased]: ... by order of Congress, the Pentagon must present lawmakers with a written plan to phase out killing animals to teach combat medics ... Pentagon is to rely less on use of animals and more on use of simulators. ... [ADLC emphasis]

We are very pleased to inform members and supporters of the Animal Defence League of Canada's non-animal-using Alternative Research Fund (ARF) that your donations have made possible the latest grant of $25,000 to University of Ottawa Skills and Simulation Centre (uOSSC) Advanced Trauma Life Support Program (ATLS) for research within the Program to continue developing and improving the unique capabilities of the interactive, lifelike, highly sophisticated state-of-the-art "human" mannequin simulators.

UOSSC is a worldwide leader in simulation-based education, and the largest simulation training centre of its kind in Canada. Their ATLS Program provides vitally needed human-based trauma training to care for extremely traumatic injuries such as occur in war, motor vehicle accidents and natural disasters, explosions, exposure to chemicals, burns, penetrating and gunshot wounds and other injuries. These intricate mannequin simulators are fully interactive, with heartbeats, breath sounds, vital signs, and required special capabilities, which facilitate this first-rate human-based trauma training.

ADLC urges Canada's Department of National Defence (DND) to end its abuse of animals in training battlefield doctors, and to instead adopt this human-based ATLS Program. Canada could then be one of the 23 NATO countries which avoid needless and severe animal suffering, by providing excellent state-of-the-art human-based training on modern mannequin simulators. We would no longer be part of the six NATO countries which provide second-rate suboptimal training experience by traumatizing and killing pigs and goats - which are anatomically vastly different from humans.

The Animal Defence League of Canada (ADLC) Alternative Research Fund (ARF) exists for the purpose of developing and promoting excellent alternatives to the use of animals in biomedical research, testing and training. ARF does not fund projects which use any animals or animal tissue.

We were pleased to issue to the University of Windsor's Canadian Centre for Alternatives to Animal Methods (CCAAM), (Dr. C. Chandrasekera, Executive Director), our ARF Grant of $70,000 Canadian towards the purchase of a Virtual Dissection Table for the CCAAM Training Laboratory to promote alternatives to animal dissection.


We are very pleased to have been able to support this worthy project with the ADLC non-animal-using Alternative Research Fund (ARF).

" ... Our '21st Century Dissection for the 21st Century Classroom' project has been successful beyond my expectations!

We launched this program early Fall within the Windsor-Essex Catholic District School Board (WECDSB) and held our media release last week. Please see below for coverage from all major media outlets in Windsor (Windsor Star, CBC Windsor, ... etc.).

In partnership with CCAAM, the WECDSB is fully engaged in a 2-year project to phase out all animal dissection within the entire school board - phasing out grade 10 frog dissection this year and grade 11 fetal pig dissection by next year.

This is the first school board in Canada to eliminate animal dissection across the entire board!

I am thrilled to say that student responses have been tremendous throughout the semester so far — the Windsor Star article below gives you a glimpse into their typical responses (they are excited and engaged, not grossed out).

The Board's commitment to this project was clearly displayed by the vast support from teachers to science consultants, all the way to their higher administration and their board of trustees. Mr. Dan Fister, the Board's Executive Superintendent for Innovation and Experiential Learning, said this during the press conference:

'If students can achieve the same learning expectations as traditional methods with similar or superior results without harming any animal, then why would we remain shackled to a 100-year educational practice?'

Building on this success — and as outlined in my strategic plan — I will continue to work tirelessly to spread this program regionally, provincially, and ultimately across Canada.

Thank you very much for your generous contribution that made this work possible! ..."