Please donate and help support our work on behalf of animals

(For advertisements in full view, please click on thumbnail images.) 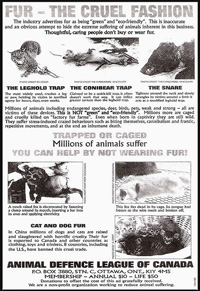 We place our "FUR - THE CRUEL FASHION" newspaper ads regularly. In addition to exposing cruel trapping methods and "factory farming" of fur-bearing animals, the ad also warns of cat and dog fur in clothing, toys and trinkets. Our ad urges the public not to buy fur.

Our ANTI-FUR/ANTI-TRAPPING advertisement was placed in the OTTAWA CITIZEN (Ottawa, Ontario) on November 28, and December 5th and 12th, 2010. Anti-fur ads were also placed in the Ottawa Citizen in 2011 and 2012. 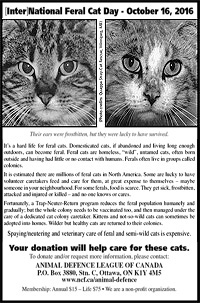 Every fall we place our "[INTER]NATIONAL FERAL CAT DAY - October 16" newspaper ad with information on the needs and care required for feral cat colonies. 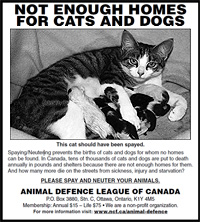 We raise public awareness of the importance of spaying/neutering cats and dogs. Since December 1995 we have made several written and oral presentations to Ottawa City Hall and have been part of the effort by animal-concerned groups and individuals who succeeded in keeping the low-cost City of Ottawa Spay/Neuter Clinic open after there had been the danger of closure.


From our December 14/95 Oral Presentation to the City of Ottawa :

"... In August of this year [Aug. 29/95 Winnipeg Free Press] Winnipeg was examining ways to reduce costs and cat and dog overpopulation. They were looking at Regina's subsidized animal sterilization program, which brings together the city, the veterinarians and cat and dog owners, each sharing a third of the cost of pet sterilization.

Within the first eight months of its inception in 1990, it was clear the program was a tremendous success. Since then the Regina subsidized, low-cost spay/neuter program has seen

the number of cats and dogs euthanized drop by 36 percent,
the city's animal control costs continuing to drop,
and the number of lost animals returned increased by 16%.

This emphasis on subsidized prevention of the birth of cat and dog litters is consistent with a U.S. 1976 study (Ref: U.S. Congressional Records #5612 and 5613 published Feb. 7/73 contain the report of Research Co-Ordinator Mr. Sorich (Masters degree in Science and in Business) on a study of The Economy of Preventing Births of Unwanted Cats and Dogs. [revised in 1976]), that for every dollar invested in a low-cost spay/neuter clinic there is close to $10.00 saved in animal control costs, based on a municipal cost of $12.00 to process one animal. Today's costs are much higher, and the savings are correspondingly greater. Low-cost spay/neuter service is the most cost-effective and humane way to deal with cat and dog overpopulation..." 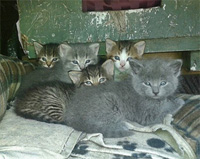 Please spay/neuter your cats and dogs

"ANIMAL SHELTER STATISTICS 2013", report published on December 16, 2014 by the Canadian Federation of Humane Societies (CFHS), Ottawa, Ontario: Excerpt: "... [A CFHS online survey was] sent to the 172 Canadian humane societies and SPCAs to complete .., and 90 complete responses were received. ...

Adoption In 2013 adoption rates were very similar for cats and dogs at 47% and 45%, respectively, relative to the total shelter population ... . Adoption rates for cats have increased in 2013 relative to previous years and are at the highest levels yet observed ... .

Euthanasia Euthanasia numbers for cats and dogs continued to differ markedly in 2013. On the positive side, significantly fewer cats were euthanized in 2013 than in 2012. In 2013, 38,000 cats and 8,000 dogs taken in to shelters were euthanized ... compared with over 52,000 cats and almost 9,000 dogs in 2012 (CFHS, 2013). In general the euthanasia rates appear to be decreasing relative to 2007 and 2008 levels, particularly for cats ... . Unfortunately, euthanasia rates for cats have been consistently twice as high as those for dogs over the last 20 years. This dire situation reflects the cat overpopulation crisis in Canada, which is described extensively in CFHS's Cats in Canada report (CFHS, 2012). ..." 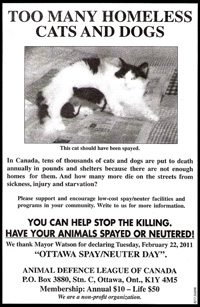 For many years we have requested the Mayor of Ottawa to declare an "Ottawa Spay/Neuter Day" in February. We place a newspaper ad when the day has been proclaimed.

Spay/Neuter ads are also placed during the spring/summer months informing the public of the importance of spaying/neutering their cats and dogs. Spay/neutering reduces the number of cats and dogs being euthanized or dying on the streets because there aren't enough homes for them. 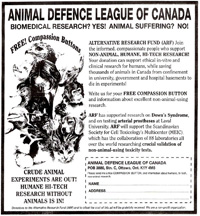 March 1982 saw the establishment of the ADLC's Alternative Research Fund (ARF) to promote and develop alternatives to the use of animals in biomedical research. 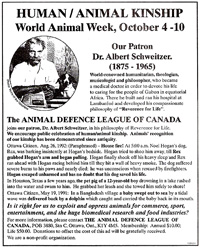 Gorillas have demonstrated concern for human children. August 31, 1986, in a widely publicized event, a five year old boy fell into the gorilla enclosure at Jersey Zoo. A gorilla named Jambo placed himself between the boy and other gorillas, and stood guard over the unconscious child, in what ethologists analyze as a protective gesture. At one point he stroked the boy.

In a more recent case, August 1996, a three-year old boy fell 18 feet into a "gorilla exhibit" at the Brookfield Zoo, about 10 miles west of downtown Chicago. Binti, a female with a baby gorilla on her back picked up the boy, cradled him in her arms, and placed him near a door where zoo keepers could retrieve him. Binti demonstrated concern and intelligence in placing the child near this door.

These and similar stories indicate that some animals, just like some people, recognize and feel a kinship between our different species. Harvard biologist E.O. Wilson says: "We must rediscover our kin - the other animals and plants with whom we share this planet. We are related to them through our DNA and evolution". Click here for further discussion about Human/Animal Kinship 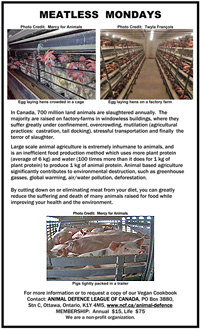 MEATLESS MONDAYS - By cutting down on or eliminating meat from your diet, you can greatly reduce the suffering and death of many animals raised for food while improving your health and the environment.